History of the Town of Schaghticoke

Schaghticoke at the Battle of Antietam

Recently I visited Antietam, site of the bloodiest one-day battle of the Civil War, September 17, 1862, partly because I hadn’t been there, but partly because a man from Schaghticoke was wounded in the battle, died there, and was buried in the National Cemetery. I found that out from research at home, and wanted to actually find his grave.
Antietam was the battle which ended Robert E. Lee’s first attempt to invade the North. Just two days earlier, a 12,500 man Union garrison (including the 125th NYS Infantry Regiment, our local men) at Harpers Ferry had surrendered to General Stonewall Jackson, removing that threat to Lee. This encouraged him to move farther North and engage the Union Army under General McClellan in battle near Sharpsburg, Maryland. I can tell you that the Maryland countryside is lush and Sharpsburg still a pretty little town, though nearby Hagerstown has a huge outlet mall.
Nearly 100,000 men fought in the battle at Antietam, with about 23,000 killed, wounded, or missing by the end of the day. Though losses on both sides were heavy, the Union Army held the field at the end of the day, giving them a costly victory. This was the push President Lincoln needed to issue the Emancipation Proclamation, freeing the slaves of the Confederacy. And this ended Lee’s invasion of the North until Gettysburg, almost a year later. 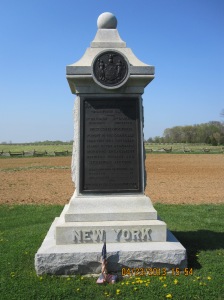 The National Park Service has done its usual fine job of explaining the battle as one drives around the fields where it occurred. The landscape is approximately what it was in 1862, a mixture of farm fields and groves of trees. The monument erected by the 104th NY Infantry after the war marks its location during the battle, and probably the location of the wounding of our local participant, John Lyons, who was in that unit. Portions of the two armies fought back and forth for a couple of long and bloody hours at the site. The field in the background of the photo was filled with ripe corn, which concealed the soldiers at first, but was soon tramped down.
Antietam was the first time in the war there had been casualties on such a large scale. The little town of Sharpsburg was overwhelmed by the dead bodies of men and horses and by the numbers of badly injured men who needed tending. The local newspaper reported afterwards that every house became a hospital for one of the 12,000 wounded. Both sides were prompted to organize to deal with tending the wounded and burying the dead in a better way after future battles. They had to accept the grim reality of this deadly war.
About 3500 men were buried in the farm fields where they died; but some bodies were never buried. Over time, bodies became exposed in shallow graves. Imagine what we would go through if the fields on either side of Route 40 in Melrose were littered with decaying bodies of men and horses, plus parts of broken artillery pieces and equipment. Finally in 1865 the state of Maryland purchased land to make a proper cemetery. Most of the Union dead were later re-interred there. The Confederate dead were supposed to be in the same cemetery, but the war was too recent and feelings too bitter, plus the impoverished South could provide no funding to help with creating the cemetery, so they were re-interred in three local cemeteries. Some men had been tagged with their names by their comrades, other identities were determined by laborious research, some remained unknown. The burials in what is now a National Cemetery are organized by state. The cemetery was completed in 1867, dedicated by President Andrew Johnson. In 1880 a 21’ tall statue of an Infantryman was added to the grounds

John Lyons was an Irish immigrant to Rensselaer County. He was born around 1830 and married to an Irishwoman named Alicia or Alice, who was born around 1836. They had two children, James, born in 1858, and John, born in 1862. Both children were born in New York, so I’ll assume the couple had arrived in the U.S. by 1858. I cannot find them in the 1860 census. However there are lots of men named John Lyons in that census!
John enlisted in Company K of the 104th NY Infantry Regiment on February 18, 1862 in Troy. He gave his age as 30. In the report of the Pittstown Town Clerk after the war, it states he was born and lived in Pittstown as a farmer, and that he was killed at Gettysburg. I think that is incorrect both in his place of birth and in where he was killed, though he probably lived in Pittstown. On his record card from New York State, it states that he was wounded in action at Antietam on September 7, 1862 and died on September 20. So he was one of the 12,000 wounded tended in makeshift hospitals all over the Sharpsburg area after the battle. 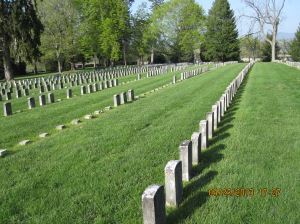 From his record card, I learned that John was interred in grave 642 at the Antietam National Cemetery, Sharpsburg, Maryland. It was very exciting to walk through the morning dew on the grass of the peaceful cemetery and find him, just where he was supposed to be, one in a rank of many similar stones in the New York section. This 21 foot statue of an infantryman is the centerpiece of the cemetery.

tombstone of John Lyons of Schaghticoke at Antietam National Cemetery

this 21 foot tall statue of an infantryman, called Old Simon, is the centerpiece of the Antietam National Cemetery

Alice was left a widow, with two small sons; one born after his father went off to war. She stayed in Rensselaer County. She applied for a widow’s pension on May 16, 1864. I don’t know where she was in the 1865 census, but by 1870, she was a chambermaid, living and working in the inn of Garrett Groesbeck in the village of Schaghticoke. Her son James, 12, worked in the woolen mill, and John, 7, attended school. By 1880, she and the boys were living with two other families in a house in the village. She was not working, and the boys, 22 and 18, ran a news room. She appears on a list of those receiving pensions in Schaghticoke in 1883, when she received $8.00 per month. In 1890, Alice entered John’s information in the Veterans Census.
In 1900, she remained in the village, but now lived alone in a house that she owned. At age 62 she was running the news room. The census states that she had had two children, both living. Her sons didn’t live in Schaghticoke, but I’m not sure where they were. By the 1910 census, Alice is gone, but I don’t know when she died nor where she was buried. She did well as a single mother, I think. Most young widows would have remarried, but she did not. She took advantage of the pension she was entitled to and supplemented it with her own work and that of her sons, eventually owning her home.
I wonder if Alice ever knew where John was buried, and if she ever got to visit his grave. How ironic for us to know where he is buried, after dying in a chaotic situation after a huge battle, while not knowing were Alice lies, after living out a peaceful life in our small village. It makes me feel very good to have found John and tell you his story so that we may honor his service together.
local history, New York State history, Schaghticoke Antietam, Civil War, Schaghticoke
RSS feed