History of the Town of Schaghticoke

I discovered this Schaghticoke-born Civil War soldier from his obituary in the Schaghticoke “Sun” in August 1897. B.B. Crapo was a pillar of the town of Prescott, Arizona. He was the son of John Knickerbocker and Sally Bullard Crapo, born in Schaghticoke in 1841. John was the son of Peter Crapo, who though born in Massachusetts had fought in the Revolution in a New York Regiment. I have found no connection to the Knickerbocker family, so it seems John was named for a man that Peter admired, perhaps Colonel John Knickerbocker, first Colonel of our local Revolutionary War regiment.

In any event, I did find Beroth, called B.B. in his obituary, in the 1850 US Census for Schaghticoke with his parents. He enlisted in Company E of the 17th Connecticut Infantry Regiment in Weston, Connecticut. He was listed as a machinist. I cannot find him in the 1860 US Census, but perhaps he had moved there for work.  The occupation of machinist implies he was working in a mill.

The 17th Connecticut arrived from the North in Baltimore, Maryland on September 3, 1862. It fought in the battle of Chancellorsville May 1, 1863, when B.B. was both wounded and captured. However he was paroled a couple of weeks later. Did he recover in time to serve with the Regiment at the battle of Gettysburg on July 1-3? We don’t know. Next the regiment served in South Carolina, in actions against Fort Sumter and Charleston. It stayed on the coast, moving on to St. Augustine, Florida by the end of the war in April 1865. In January 1864, B.B. was promoted to Corporal.  He was discharged with the rest of the regiment on July, 1865 at Hilton Head, South Carolina.

B.B. married Jennie Davidson in Prescott, Arizona in 1867, according to Arizona marriage records. Jennie was born in Scotland in 1849. I don’t know how B.B. and Jennie ended up in Arizona at what was basically its founding. He was certainly a pioneer, probably crossing the country by wagon, as the transcontinental railroad was not completed until 1869. I think that he and Jennie returned to Rensselaer County for a time, before returning to settle and farm in the Skull Valley area, near Prescott, Arizona. I found Beroth, 29, working in an axe factory in Pittstown, living with Jennie, 21, and baby son David, 8-months-old, in the 1870 US Census. His parents lived nearby with their son George and his family.

The 1880 US Census listed the family back in Yavapai County, Arizona: B.B., 39, a farmer, plus Jenny, 29, and David, 10; Cora, 6; and Alice, 3. It seems amazing that anyone could farm in Skull Valley, but it does get 19 inches of rain a year- still not much. We would love to know how the farming went. In 1881 B.B. applied for a Civil War pension, at the point where they were only awarded for disability. According to his obituary, he was a member of the Masonic Lodge and the G.A.R. in Prescott. He had been a member of the Victor Lodge in Schaghticoke as a young man. The obituary also stated that he had moved to Arizona in 1869, but the public documents, of his marriage in Arizona in 1867, and the 1870 Census in Pittstown, tell a different story. 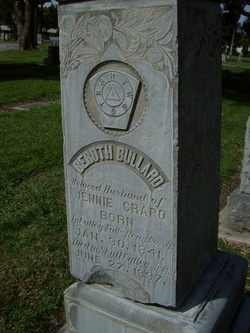 B.B. died in Prescott in 1897. He clearly had maintained a connection to Schaghticoke, as his obituary was published a month later in the “Sun.” The obituary says he was buried in Prescott, but Find-a-grave states that he and his wife Jennie, who died in 1912, are buried in San Bernadino, California. I don’t know why there is this difference,but the pictures seem clear. The tombstone also states he was born in Valley Falls and died in Skull Valley. Wouldn’t we like to talk to this couple about their amazing life experiences?